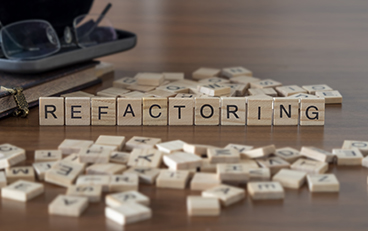 When we use the words “refactoring” and “maintenance,” there is often a common understanding of what concepts we are referring to. While these words seem to describe the concepts very well, we cannot be sure that their meanings are perceived in the same way.  By taking a deeper look into this topic, I will be sharing my thoughts on the subject. Let’s try to define “code maintenance” and “code refactoring” before going into greater detail about how they are related.

Refactoring is the process of modifying code without changing the external behavior of the software. Most of the time, the initiative to refactor comes from architects and developers. The development team generally knows what improvements the system requires and is familiar with the technical debt they are facing. Examples of common technical debt encountered include:

The team should keep track of technical debt. Ideally, time should be allocated for technical debt reduction post release. Refactoring tends to create significant changes that have a high potential to reduce code quality. The beginning of the next release cycle is the best time to make those changes.

Functional changes may alter functionality of the software and are usually initiated from the outside, including:

Non-functional changes don’t change the functionality of the software, but improve it internally, such as:

Why do we refactor the code? There can be many reasons why people conduct refactoring. We will now discuss some of the most common reasons.

If a project was built using the latest technologies, such as languages, tools, frameworks, libraries and methodologies, there will always be a risk of costly refactoring early on down the line. New technologies tend to evolve at the beginning, which can lead to revolutionary changes in their design, or even more frightening, in their interface. If your project has a lot of code written using the first version of some new framework, and then the provider of the framework decides to change the way it interfaces with the consumer (your project, in that case), you will have no choice but to reimplement a significant portion of your code. When a new technology comes out, it’s better to suppress the temptation to jump right on it. Let it mature for a bit.

Cleanup after Another Team or Project

A big challenge is when you have to pick up an existing project from another team. Most of the time, this transition comes with a lack of documentation, little-to-no knowledge transfer, or a previous team that is too busy, inaccessible or uncooperative. Sometimes, the new team can have a different set of expertise. Consequently, all of these possible scenarios can easily lead to a decision to reimplement the whole system or a big part of it. There is also the added risk that the new team, due to a lack of understanding of the existing system, underestimates the complexity of the system.

Ugly code can also be caused by infrequent collaboration between groups, when different people implement the same function due to a lack of effective communication.

From the client’s perspective, refactoring is some strange activity that they are asked to pay for, but with no new features being added. Some clients may be reluctant to approve such activities. Sometimes, refactoring tasks can require massive changes. For example, if we want to replace a library that is used throughout the system, we first need to analyze where it’s used, its different patterns of usage and how replacement libraries can be integrated in all the cases.

The greater the number of changes, the greater the number of bugs added. Global changes, like migration to another platform or replacement of third-party modules, will introduce instability in code quality. No project has a perfect regression test set, and even if it does, many tests will be specific in the way the system is using technologies that are being replaced. New technologies will inevitably introduce new scenarios of usage, and make other scenarios obsolete. In any case, the regression test set will become obsolete, and successful execution of it doesn’t mean that system has the same quality as before. You have to accept the fact that quality will go down and will require some time to improve by trial and error. This factor is one of the reasons why it is hard to sell such improvements to the clients.

Opinionated frameworks help with rapid development by hiding a lot of the piping and making code cleaner. While useful, they rely heavily on reflection to do autoconfiguration. When it comes to the upgrade, they can cause unexpected problems because frameworks themselves can change internally and start to configure the application differently. As a result, problems can be hidden and hard to pinpoint. Since the entire system relies on the framework, the update can cause large scale refactoring.

When a team is on a tight schedule, corners can be cut, optimizations can be saved for later, unfinished code can be left in the code base, for instance. This incurs technical debt that should be addressed in the future.

As the system is in production, real world problems, such as bugs and maintenance and performance issues, will begin to emerge. To solve these problems, operational solutions will need to be implemented. Examples include:

As the list of complaints grow, it becomes obvious that many of these problems can be solved internally. Internal solutions often can be more elegant, less complex and more future proof.

Refactoring modernizes and improves software, but any serious changes come with associated risks, including:

The need for refactoring is inevitable. We need to be ready for it. There are number of ways we can organize the code to make refactoring easier. These include:

The variety of technologies available expand every day. Be it Java, Javascript, .NET or Python, every technology ecosystem has its own set of approaches, tools, standards and practices. While this post only scratches the surface of code refactoring and maintenance, we hope it provides a good overview of all the factors that come into play. The important lesson is to ensure that you do not underestimate the level of effort, and the considerable risk, of refactoring. Also, proper planning is important, or you will just end up refactoring again to correct the workaround or partial solutions you implement. Better yet, when originally developing code, try to avoid the pitfalls outlined in this post to minimize the need for refactoring in the future.