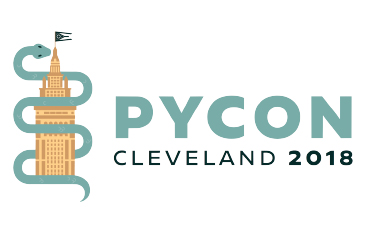 We recently attended the 2018 PyCon Conference in Cleveland hosted by the Python Software Foundation (PSF).  This yearly conference happens to be one of the largest conferences held for the open-source python programming language community in the U.S. Our company was a silver sponsor for the three-day event that included talks, exhibitor booths, open space discussion rooms, end-of-day lightning talks, a poster session, and a job fair.  We met and spoke with many talented developers and companies who were part of the Python community.  There were two other supplementary events—tutorials and development sprints—offered before and after the conference that our team did not attend.

The conference offered six concurrent sessions of talks held throughout the day on a wide variety of Python-related topics from data science to blockchain to application development.  In addition, the Expo Hall allowed attendees to mix and mingle with a large number of exhibitors.  The booths displayed included well-known players, such as Google, LinkedIn, Microsoft and IBM, as well as smaller companies who use and support Python and wish to market to the attendees.  The conference also showcased a good array of presenters who shared and discussed a whole host of approaches to Python programming.  One of the morning keynotes, by Qumisha Goss, a librarian at the Detroit Public Library who uses Python and Raspberry Pi to teach under-privileged children, was particularly inspiring.  Many of the sessions provided real-world benefits that can be applied to our day-to-day work and projects.  For instance,  Andrew Knight’s Behavior-Driven Python talk was quite useful.  It provided a detailed description of Python’s behave test framework and explained the best practice for this form of approach. It will allow us to rethink the strategy for our current and future behave test cases. Another session that was helpful was Justin Crown’s What is this mess?, which discussed writing tests for pre-existing code bases.  It presented a structured approach to adding unit tests and new functionality to legacy code.  Other talks that were equally beneficial included Jack Diederich’s HOWTO Write a Function, Alex Gaynor’s Learning from Failure: Post Mortems, Kyle Knapp’s Automating Code Quality, Carol Willing’s Practical Sphinx, Brian Okken and Paul Everitt’s Visual Testing with PyCharm and PyTest, and Larry Hasting’s Solve your Problem with Sloppy Python.

As web developers, some of the sessions we attended also offered a look into the other side of the Python ecosystem and satisfied our own personal interests and curiosity.  For instance, core developers presented the current progress of the Python language, such as Raymond Hettinger’s Dataclasses: The Code Generator to End All Code Generators.  There were also several sessions about Machine Learning that were fascinating.

We felt this was a worthwhile conference, and one we would consider attending again in the future.  We would especially think about attending the tutorials and workshops prior to the conference or stay to work on the developmental sprints after main conference. This event not only offered the opportunity to gain knowledge and the ability to network with other Python developers but also provided a glimpse into how different companies, developers and data scientists use the Python language.  The breaks and lunches allowed us to meet and mingle with other analysts, developers and vendors to share ideas and learn from one another.   In particular, we enjoyed our company-hosted happy hour where we invited other developers to chat.  This event at an outside venue was fun and relaxing, enabling us to get to know some of our teammates better and talk to other attendees with different backgrounds and experiences using Python.  Overall, PyCon 2018 enabled us to share ideas with other developers, provide attendees with information about Artemis and what we do, and become more involved in the Python community.