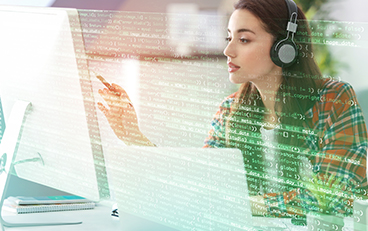 Originally named “AngularJS,” Angular is a JavaScript framework written in Typescript. Created in 2010 by Misko Hevery at Google, its primary goal was to make web applications easier by providing a client-side framework that extends HTML and allows dynamic views. Google ran into problems with AngularJS because it was not built with the forethought of being used for enterprise applications that scale. Consequently, it was restarted, and Angular 2.0 was born. Around the same time as AngularJS was created, React, a JavaScript library, not a framework, was created by Jordan Walke at Facebook (now part of Meta) to help alleviate the strain of maintaining the existing code base for the social media platform. React, unlike AngularJS, did not face enterprise-scaling problems and was used internally by Facebook for its newsfeed and then by Instagram before being open-sourced in 2013. Vue was released in 2014 by Evan You after a few years of working with AngularJS at Google. The purpose of Vue was to take the best features from React and AngularJS in an effort to make the best possible technology for creating web applications. Vue has the smallest community of all the three technologies, but it has been growing in popularity in the United States.

PROS AND CONS OF ANGULAR

Google’s Angular has a dedicated team that is extremely well organized and provides a clearly outlined roadmap of the framework’s future. Along with this level of support, Google provides excellent documentation. The information is also readily available in one place to offer answers to questions or problems that may arise. An easy tool exists that outlines the steps for updating the application to the version needed. Angular has a clearly defined structure that leads to an easily scalable project. Since Angular uses Typescript as the language, not JavaScript, it is stricter and leads to fewer errors in the application down the road. The MVVM architecture of Angular tends to make its projects very structured. This organic structure allows the project to continue growing without ever becoming chaotic, allowing new team members to get quickly up-to-speed and become productive on these projects. Angular’s reactive forms allow you to keep close control of all the fields on the page and easily send it to your backend. Moreover, a comprehensive set of services are provided by the framework, which is less of a hassle in terms of having to hunt for a third-party provider to do something simple, such as an http request that might be needed for the backend.

As a framework, Angular will inevitably have some extra bulky features and components that are not needed and cannot be removed. In more recent versions, however, the Angular team has done a good job of improving performance issues. With this in mind, it should not be the first choice if a small single page application is needed. Being a framework, Angular leads to some annoyances, requiring developers to fit their ideas into its default structure. The intricacies of the MVVM architecture that Angular uses can be confusing to developers who do not have much experience coding in it. Angular’s architecture is easier for developers with back-end experience; whereas, those with primarily front-end experience will have a steeper learning curve.

PROS AND CONS OF REACT

As a JavaScript library, Facebook’s React allows developers to be able to truly customize each component to their exact liking. This customization offers a blank canvas that enables developers to only use the components they need. Given that only these components are used, it is fast and efficient. It gives developers the flexibility to select whichever libraries or plugins they want to use. Being able to select only the components or libraries that one needs allows React to be faster than Angular. The virtual DOM allows React to keep its UI synched with the real DOM, letting it know whether or not to render a certain component, thereby, making it very fast. React uses single direction data flow, which is a huge performance boost. React is highly flexible with a lot of the UI components being easily created and plugged in wherever they are needed. This modularity allows teams to quickly complete complex user interfaces. Overall, React may be easier for experienced front-end developers to learn.

On the other hand, React may have a steeper learning curve for developers with more back-end experience. For these developers, understanding the flow of the application may take longer to get acclimated with. Once you introduce Redux or more advanced functionality into React, the complexity and learning curve often increases dramatically. Since React is not a framework, it is not as well structured as Angular. It requires the development team to lay out a well-defined architecture, and a team effort in maintaining the structure and coding standards for the project. The lack of structure is less of an issue for more experienced developers and/or organizations with well-defined project guidelines. In more ambiguous situations, however, the code base can lead to confusion when new developers are brought in and may not be able to get as quick an understanding of the project. Currently, when React provides updates, these changes do not seem to always be communicated effectively, and developers are often unaware of them or may be unsure of how to make the necessary changes in updating the application.

PROS AND CONS OF VUE

Since Vue came after Angular and React, it was able to extract the best parts from its predecessors to provide a better framework that developers would want to use. Vue uses some of the component-based ideas from these other technologies. Specifically, from React, it took the Virtual DOM idea, and from Angular, it took the two-way binding approach. Being a progressive framework, Vue is easy to use and flexible enough to be integrated into wherever it is needed. When it comes to speed and size, Vue beats React in these areas. Vue is extremely flexible, leaving it up to the developer to pick the libraries to use, which leads to faster development time. It also comes with its own official third- party packages for additional flexibility. Vue’s short learning curve allows front-end developers, regardless of experience, to quickly jump in and have a working project without too many lines of code. Vue uses a virtual DOM for rendering views which provides a much better user experience. Along with its Virtual DOM, its use of two-way binding allows perfect communication between the data and the view.

Vue does not have the backing of companies like Google or Facebook, which may be a major turnoff for some organizations when considering adopting Vue as a long-term enterprise solution. Vue only has a small team of dedicated developers maintaining it and a comparatively small user base. Given its heavy use in China, much of the online assistance may come from non-native English speakers, causing language barrier issues. While Vue does come with a few official third-party packages, it does not come fully with what one would expect from an enterprise level framework. Vue also has much fewer plugins than Angular or React, suggesting you cannot solely rely on it to do the full job. While Vue is very adaptable and flexible, it can lead to problems in the code as the project grows.

Generally speaking, if you need a large complex enterprise level application, Angular is likely to be preferred; whereas, if you need a modular SPA (Single Page Application) or cross platform application to scale, React may be more appropriate. Smaller projects would benefit from being written in Vue given its speed and flexibility. Conversely, big projects would benefit from using the Angular framework since its structure keeps these projects more organized. Unlike React or Vue, this framework also gives developers many tools without having to look for third party libraries. React would be the better option if teams have more experienced front-end developers, while Angular is the better choice for teams with more back-end experience. If teams contain more inexperienced front-end developers, Vue might be the best choice because of how easy it is to learn. All of these various factors play a significant role in determining which of these three to select in providing the best possible final product.

Any of these three front-end technologies may be an excellent choice as long as they are suitable for the needs of the project. It is not a question of whether one is better than the other since each has its respective strengths and weaknesses. They are all front runners when it comes to selecting modern JavaScript-based frameworks. There is plenty of documentation for each of them, and they can handle different phases of projects. Each project’s requirements should primarily guide the decision of whether to use React, Angular, or Vue as the appropriate technology.